One and a Half Score Years and Five

Apologies to Tennessee Ernie Ford for massacring his song 'Sixteen Tons', but as it was my birthday yesterday, I wanted to mark the occasion by being both curmudgeonly and over-dramatic. Thus achieved, I can get on with life with the minimum of fuss. To those of you that wished me many happy returns, thanks very much. To those that didn’t, why are you reading my blog? The internet is full of nudes, for God’s sake.


Ostensibly, at age thirty-five, I am officially middle aged. Medicine being what it is, I can expect to target a number far beyond three score and ten, so I don’t think it’s all cardigans and tartan booties for me yet. When a colleague asked me today if I felt old now, I replied, ‘I have a thirty-five year old body, a seventy-five year old’s knees, an undergraduate’s urgency and an eighteen year old’s sense.’ I didn’t really, I thought of most of it later, when I was pretending a spreadsheet was more complicated than it was.
Like most people, I don’t feel any different at all for having marked the ageing process. I think by this time I hoped I’d have figured a lot of stuff out, because I’ve grown up with that particular fiction. We mark 18, 21, 30 and so on, but at each of those markers I felt each of them receding just as I was about to touch them. So I still can’t drive, which most of my contemporaries managed to get out of the way almost two decades ago. I’ve seen more Citizen Khan than I have Citizen Kane. I have to concede that I will never play Shea Stadium in the world’s biggest rock band; I’ll probably never even do karaoke in the Swan with Two Nicks, Worcester. In 12,775 days, pretty much the only thing I know for certain is that when asked by a dentist how many times a day they brush their teeth, a hundred percent of people will lie about it.

One scary part of turning thirty-five is that I’m rapidly catching up with my characters in my work in progress. The novel is based in 2015, and the characters left school in 1991. Partly this was so there would be an appropriate distance from the past, and partly it was because my eldest sister left that year and it made it easy to keep track of their ages. However, when you consider The Sad Club had its genesis around 2007, the characters I’ve created would have been younger than I am now when they had to make a decision whether or not to kill someone to fulfil a childhood vow to each other. The real me struggles with the morality of it, so what chance have fictional characters got? 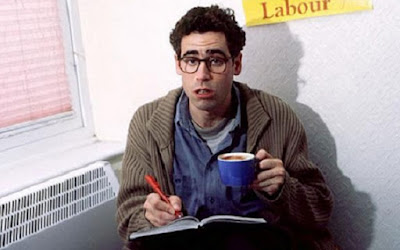 Only a man like Adrian can truly know the pain of being from Leicester
This is what I mean when I talk about wanting answers. To me, lots of my schoolfriends have it sussed out. They have families, mortgages, careers. I feel sometimes like I missed the assembly they discovered it all from. When I was younger, adults seemed to know what they were doing, but now I’ve been one for nearly half my life, I realise how many were just winging it, and continue to do so. This doesn’t absolve a person of responsibility, but it’s encouraging to know that I’m not in a state of arrested development.
I think it does a novelist good to never be sure of the right thing to do in a plot. I sometimes don’t know if I fancy a cup of tea before bedtime (often not, now; God knows how old my bladder thinks I am but I’m not raving about it), so to know for sure whether an innately good man like Elliott would kill for his absent friends, or if Alex falls back into his Class A habits, might be too omnipotent for my comfort. But like my life, I have a clear idea of where I want them to end up, and so I push them there, sometimes kicking and screaming and holding a balloon like the little toddler I still am on some occasions.
And now I’m going to lighten up. I’m only thirty-five. They don’t even make a badge for an age as nondescript as that.

Popular posts from this blog

With it being Christmas Day tomorrow, and with the two years we’ve all had, nostalgia might well be the key ingredient gracing the dinner table in people’s houses. Christmas is a time for creating memories, good or bad, and you can guarantee that whatever the weather there will be smiles, tears, arguments and people going over the top about that Nando’s gift set which will be next seen in the window of the local Blue Cross . After having a lovely memory of Christmas 1990 published in Museum Of Jerseys , it dusted off a few memories of the next few Yuletides, and so I thought I’d put all my nineties Christmases together to see if there was a thread - a Christmas ribbon, if you will. If you won’t, well, sod you - you’re the one reading when you ought to be wrapping. Enjoy! 1991 - Robin Hood: Prince of Thieves Action Figures I think I grew up in the Golden Age of action figures. At the age of ten I had caught the tail-end of Star Wars merchandising, which was such a big money-spinner
Read more

Euro 2020 begins today, and with the final at Wembley it seems somehow right that the tournament had to wait a year to create a 25 year gap with the last one. During last year's lockdown Euro '96 was repeated on ITV's streaming services to deflect us from the enforced emptiness, and although I made a start on watching it, it was nowhere near as good as I remember it being. But with excitement building, I thought it might be a nice idea to share a few memories of the summer of '96, partly before I go ga-ga and partly because the highlights of these events are so much different from the reality. Mine, I'd argue, was a perfectly normal Euro '96 experience, and if you take a read of these eleven nuggets of memory, you might find yourself nodding along. And, y'know, it's something to do at half-time. An Opening Day Win – In 1996 I lived in a very small world, one which encompassed about half a dozen streets between home, school, friends and grandparents. The
Read more

Life is full of curiosities, and it’s inevitable that you’ll come across the odd coincidence here and there. I guess it’s a small one that within days of one Prince passing , it’s the anniversary of the death of a much more colourful one. Today marks five short years since Prince Rogers Nelson was found dead at his Paisley Park home, in circumstances that seem ill-fitting with both his lyrical themes and his beliefs. Personally, at the time, Prince’s death was far more of a rider to that of David Bowie . I liked some Prince stuff, but in the same way that I enjoyed, say, Belinda Carlisle . I hadn’t grown up with Prince in the same way that I’d grown up with Bowie, and neither had he been a touchstone in any aspect of my musical education. Nobody at school was a Prince nut; nobody at university walked about in a purple knee length frock coat and ruffles . You didn’t even hear ‘ 1999 ’ played at the student disco. Not that that’s an excuse; you didn’t hear Gay Dad either, but I bought
Read more

Chris Stanley
Chris Stanley is the name, and awkward introductions are my game. So, I'm a writer. This is my sweeeeet blog about that, with some random thoughts about thinking thrown in. Think of it like an album which you love on first listen, and then like a bit less every time you put it on. Try and follow me on Twitter at @chrisstanley1. Go on, punk. I dare you.